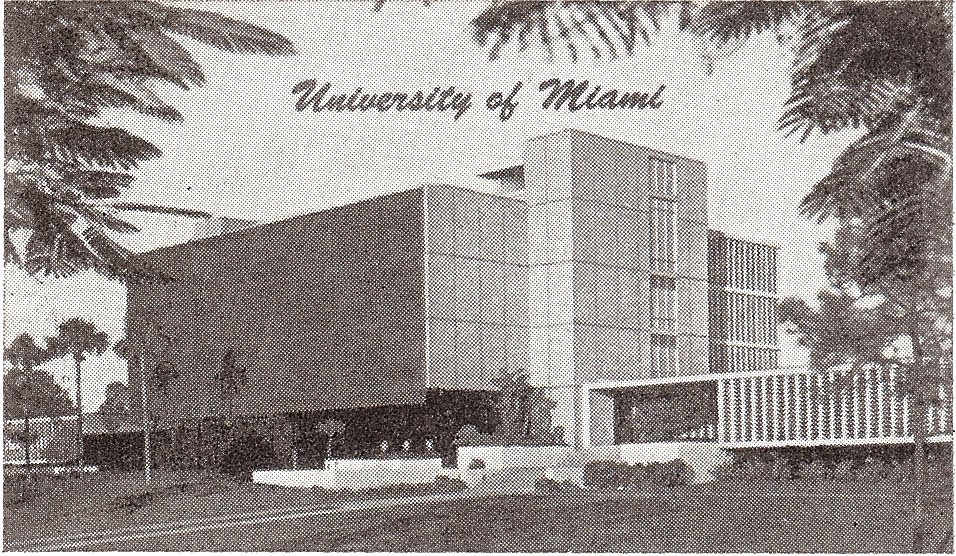 During the spring term of 1969, the local Mechanical Engineering Honor society of Pi Sigma, sponsored and endorsed by Dept. Chairman Dr. Harold J. Plass, petitioned
the national council for a chapter of Pi Tau Sigma to be instituted at the University of Miami. The petition was approved and the Miami Sigma Upsilon Chapter was formally
installed on January 22, 1970 by National President Donald R. Hayworth, Vice-President Charles R. Hayleck, and Secretary-Treasurer James W. Bayne.

Sigma Upsilon Chapter actively participates in all functions of our Mechanical Engineering Department. The chapter works with the A.S.M.E. student chapter in such
projects as Carni Gras, the homecoming float and field trips. In order to promote scholarship and close student-faculty relationship, the chapter initiated tutoring and pre-advising to students which has proven to be beneficial to both students and instructors.

Pi Tau Sigma has contributed to the professional development of the Engineering School and it will continue to do so in future years as our chapter continues to grow.

In September 28th, following the initiation, our chapter met to plan for activities like tutoring and discuss teams for planning the convention.

On most Mondays and Wednesdays, our chapter hosted tutoring sessions for underclassmen. A few highly qualified Pi Tau Sigma members were present in our general purpose conference room for three hours on Mondays and for one hour on Wednesdays, during which students who had concerns about any of their classes could walk in and receive tutoring. Students in classes such as thermodynamics and fluid mechanics were particularly encouraged to come. This was advertised through email blasts and by having the professors tell their students. We found great success with freshman who largely wanted help with classes such as physics and calculus. While a few upperclassmen came, we found that the demand was largely based around freshmen.

On February 10th, several members of Pi Tau Sigma volunteered at a regional high school science fair. They helped judge the projects and questioned the students about their work.

On April 16th, the chapter had a general assembly meeting to elect a new e-board, as well as to talk about end of the year business. The new e-board consists of Richard Dale as president, Elliot Sackman as Vice President, Andrew Schwee as Treasurer, and Ryann Hallums as secretary. At this meeting we discussed plans for the following year as well as what kind of activities the chapter would like to see more of. Activities suggested included design challenges, career planning activities, and social events like a bar crawl. We also discussed what was to be done with the money raised from the National Convention.

Throughout the year until February, members of the Sigma Upsilon chapter met to plan the 2018 National Convention. Countless hours were spent meeting with university officials, hotel managers, potential sponsors, and facility organizers. The e-board as well as a few other key players had a standing weekly meeting every Monday at 8:00 am, where we discussed the progress made the previous week and set action items for the key committees for the coming week. The week leading up to the convention students met every day from 5 until 8 pm in the conference room to put together registration folders, create decorations, and iron out every last minute detail. In particular I want to recognize the incredible work of Niko Minasola, who planned the social events, Wesley Wynn, who organized the food, Dani Coogan, who organized the lab tours, Richard Dale  who took photos at the convention, Max Rosenfeld who created decorations and managed the organization of registration folders, Jacquie Pape who created and oversaw the convention website, Swati Narasimhan who oversaw our budget of over $27,000 and oversaw all of the registration and payment logistics, as well as Ines Basalo, our incredible advisor who was always ready to offer support and advice wherever she could. The convention would not have happened without these wonderful people.