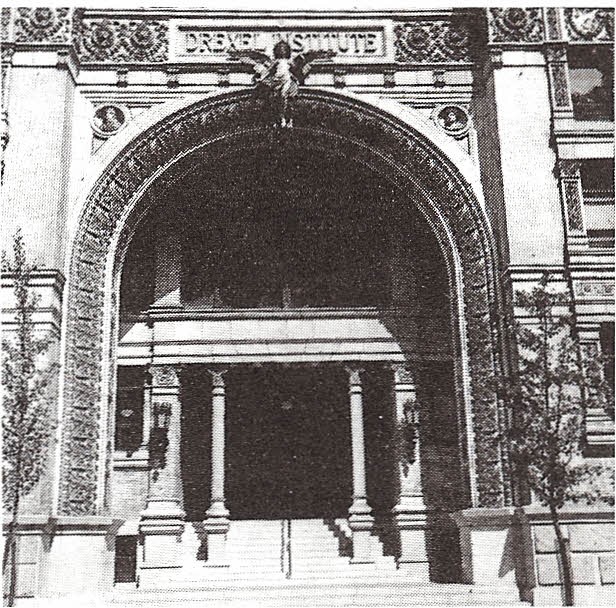 The students of Drexel University were introduced to Pi Tau Sigma through Mr. Ernest Hartford, Assistant Secretary of A.S.M.E., and the Lehigh Theta Chapter. After the petition was approved by the National Council and the chapters, the formal installation of Drexel Xi Chapter was conducted by Professor A. W. Luce and several active members of Lehigh Theta Chapter on June 7, 1933.

The Drexel Chapter plays a significant role in encouraging interest in engineering. The chapter, in cooperation with other honorary and engineering societies, sponsors the annual Engineer's Day. Through the establishment of a guest lecture series, tutoring program, and planned tours to outside industrial firms, undergraduate students have an opportunity to supplement their classroom work. The chapter also presents the sophomore and Harry L. Brown Awards which give recognition to outstanding students.

Despite Drexel University being virtual for the entirety of the 2020-2021 academic year, Pi Tau Sigma Drexel Xi made it a priority to remain as active as possible. Two general body meetings were held each term to discuss the plans for the academic year such as upcoming events and to receive feedback from members on those proposed events. Throughout the academic year, Drexel Xi was representing at the College of Engineering Open Houses – to share experiences and knowledge to better inform those considering the mechanical engineering path of study – and began participating in the College of Engineering, Dean’s Student Leadership Advisory Council, which was created to allow student organizations to have direct access to the administration, bringing up issues and concerns and preferred corrective actions with the college. This participation aided in Drexel Xi’s ability to expand its network within the University, provided resources for future events, and gave access to NSF-funded scholarships promoted by Drexel University whose details were distributed to members in our biweekly newsletter.

In the Fall, Drexel Xi hosted an industry panel with three Pi Tau Sigma alumni where they discussed their experiences at Drexel, their transition from full-time student to full-time engineer, and their career goals, while providing meaningful advice for students. To close off the Fall Term, thirty-five students were inducted during the 2020 Fall Induction Ceremony.

During the Winter Term, Drexel Xi held Fundamentals of Engineering Exam information sessions as well as weekly practice sessions, where each practice session focused on a different topic that will be present on the exam. Drexel Xi also cohosted an event called “Diversity & Inclusion Perspectives from Drexel Alums at ExxonMobil” with several other professional organizations. The alums shared their experiences in the industry and the importance of diversity, equity, and inclusion. This term also marked the start of the Pi Tau Sigma National Technical Challenge in which Drexel Xi participated. The team of four students virtually met weekly to learn about the workings of a weight-bearing drone, discuss the needs of the project, share individual research completed, and delegate tasks. The team was awarded second place in the drone design competition at the Pi Tau Sigma National Convention.

During the Spring Term, Drexel Xi partnered with Lockheed Martin to host the “Virtual Soft Skills Workshop with Lockheed Martin” event, which provided a recruiter’s perspective on how to be successful in a digital work environment. In addition, Drexel Xi cohosted an Aerospace and Design & Manufacturing concentration panels that composed of a co-op student, graduating senior, ME professor, and professional engineer all pursuing or currently working in that mechanical engineering subfield. These organizations plan to continue to cohost mechanical engineering concentration panels each month to increase the knowledge of ME subfields and opportunities to the greater ME student body. A game night as well as a virtual escape room event were held in the spring to help keep the members engaged but also destress. Five students were inducted during the 2021 Spring Induction Ceremony.

The Fall Term began with a general body meeting detailing the events for the term and requesting member feedback on their interest level in potential events. Executive board members tabled at the College of Engineering’s Fall Open House describing Drexel University, Pi Tau Sigma, and what it is like to be an engineering student. A member-built ping pong ball catapult was a popular attraction at the table, showing prospective students that Drexel engineering students learn not only the theory and math behind fundamental physics but also how to apply these theories to a tangible design.

Eleven new members were inducted during the chapter’s fall induction. This process included collecting the names of individuals who were eligible for membership by the National Chapter’s standards and who came to one of the Pi Tau Sigma informational sessions. The induction was followed by a Pi Tau Sigma welcome dinner at Landmark Americana on Drexel’s campus. Members of the executive board also presented Pi Tau Sigma at the Campus Involvement Fair to current freshmen who were looking to pursue new involvement opportunities. Simultaneously, two board members were asked to participate in an undergraduate promotion committee for a professor in the Mechanical Engineering and Mechanics Department.

The executive board members participated in ASME’s Philadelphia Project Proposal Competition where organizations, groups, and individuals submit a project proposal that promotes and improves the quality of the mechanical engineering industry for students and professionals. A presentation was presented by the board members at the ASME Project Slam event held in Papadakis Integrated Sciences Building in front of a panel of judges. Following the event, funds were granted to the Pi Tau Sigma chapter to invest in this proposed event.

During the Winter Term, Pi Tau Sigma hosted a general body meeting where numerous members gathered and discussed the future of the chapter. Proposed events and fundraising activities were suggested to encourage member engagement. Some of which included industry/academic panelists, Fundamentals of Engineering Exam practice sessions, and Pi Tau Sigma socials during finals week to help de-stress. The FE exam practice sessions were held weekly, covering a multitude of topics with fairly consistent attendance every week from members of Pi Tau Sigma as well as the general population of the Mechanical Engineering Department.

With the help of the College of Engineering, the university, and the Pi Tau Sigma National Organization, the chapter was able to send four Pi Tau Sigma members to the 2020 National Convention held at Rochester Institute of Technology in Rochester, NY. Two of these members were executive board members, and two were members that successfully ran for executive board positions for the upcoming academic year.

In the Spring Term, due to the COVID-19 pandemic, Drexel University remained closed, limiting the activity of the chapter; few virtual meetings were held. Consequently, the Spring Induction was postponed to the upcoming Fall Term, approved by the National Board. Communication was sent out on how to submit an order for graduation regalia for the graduating members.

The fall term began with a general body meeting where the board detailed the events for the term and members gave feedback as to their interest level in attending and potential events they would like to see happen. Executive board members attended the College of Engineering’s Fall Open House to talk with high school students and their parents about Drexel University, Pi Tau Sigma, and what it is like to be an engineering student. A member-built ping pong ball catapult was a popular attraction at the table. It showed prospective students that Drexel engineering students learn not only the theory and math behind fundamental physics such as dynamics and statics but also how to apply those theories to a real-life design. Throughout the term, the executive board members worked together to induct ten new members in the chapter’s fall induction. During the same time, one of the board members was asked to be a part of the undergraduate promotion committee for a professor in the Mechanical Engineering and Mechanics Department. Drexel Xi also offered and awarded a Senior Design stipend to a senior design team. The team was chosen based on eligibility (at least one Pi Tau Sigma member) and the contents of its fall term presentation. To end the fall term, the chapter joined with Drexel ASME to host a former Pi Tau Sigma president to discuss her time at Drexel as an undergraduate and at Stanford as a PhD student.

During the winter term, new and older members were given the chance to interact with each other during a pizza and engineering Quizzo night. With the help of the College of Engineering, the university, and the Pi Tau Sigma National Organization, the chapter was able to send three of its board members to the 2019 national convention held at Colorado State University. A group of members enjoyed an all-expense-paid trip to the Franklin Institute to attempt the Intergalactic Escape Room. The chapter also hosted a startup company whose mission is to help college students develop their career while still in school.

Nine new members were inducted into the Drexel Xi chapter during the spring induction ceremony. An information session regarding the Fundamentals of Engineering (FE) exam was held during the spring term. The goal of this event was to inform students on the benefits and uses of the FE exam and a PE license. Specifics of the exam (how to register, topics covered, length and difficult, etc.) were also covered. The attendance and response were so good that FE study sessions were proposed as future events to be held. As a parting gift to the chapter’s graduating seniors, the chapter bought them cords and stoles to be worn proudly at graduation.

After successfully hosting the 2017 Pi Tau Sigma National Convention, the Drexel Xi chapter introduced an entirely new executive board to lead the chapter in the 2017-2018 academic year. After acclimating themselves to their new roles, the executive board members worked together to induct 14 new members in the chapter’s fall induction. Executive board members also attended the College of Engineering’s Fall Open House to talk with high school students and their parents about Drexel University, Pi Tau Sigma, and what it is like to be an engineering student. During the same time, one of the board members was asked to be a part of the undergraduate tenure and promotion committee for a professor in the Mechanical Engineering and Mechanics Department. To end the fall term, the chapter joined with Drexel ASME to provide breakfast to the department during finals week.

During the winter term, the board brought together the chapter’s members for a pizza and game night to introduce the new and old members. With the help of the department, the university, and the Pi Tau Sigma National Organization, the chapter was able to send two of its board members to the 2018 national convention held at the University of Miami. Lastly, the board members attended the college’s Winter Open House, showcasing some of the members’ past projects to the visiting students and hosted a finals week breakfast event with Drexel ASME once again.

Six new members were inducted into the Drexel Xi chapter during the spring induction ceremony. The chapter then worked with the university’s career development center and engineering professors in charge of graduate affairs to host a graduate school information session and Q&A. The chapter also partnered up with Drexel’s chapter of Tau Beta Pi to host an Engineering Futures seminar. This was a successful and fun interactive event that exercised team chartering. Lastly, the board was tasked with creating, distributing, and summarizing the department’s 2017-2018 improvement survey which was met with outstanding participation from the student body, providing the department with data that will hopefully lead to further improvements to the engineering college’s largest department.