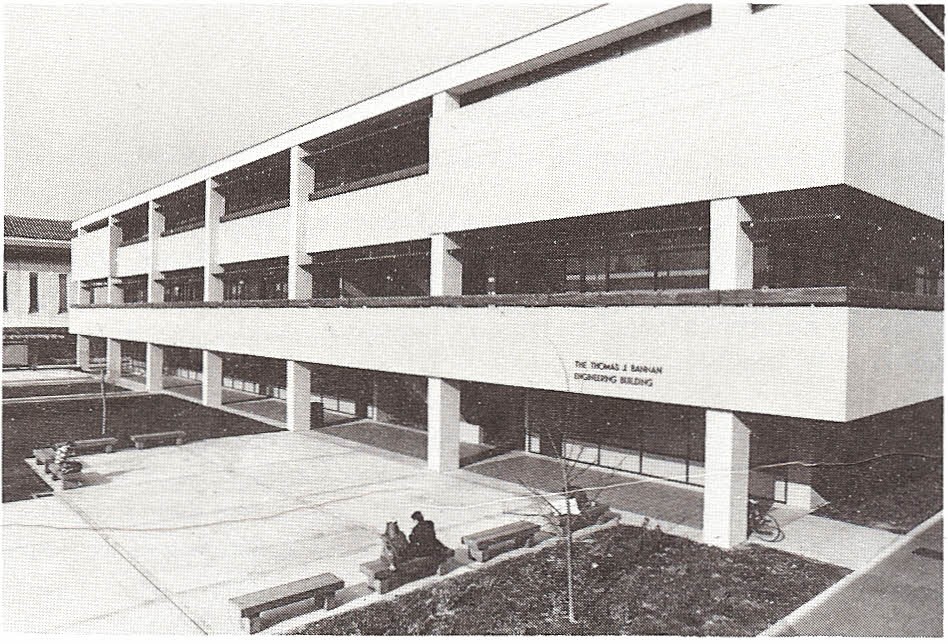 Encouraged by student and faculty interest in Pi Tau Sigma, Dr. Lilia A. Sanchez (Texas Delta Gamma) submitted a petition for a new chapter at Santa Clara University to the National Council of Pi Tau Sigma in the summer of 1990. The petition was approved at the fall convention, and the Santa Clara Alpha Epsilon Chapter was formally installed by National President Dr. James W. Welty, and Vice President Dr. Walter Yuen on April 29, 1991. To celebrate the occasion of the installation of the 150th chapter of Pi Tau Sigma, a reception and banquet were held at the Adobe Lodge Faculty Club on the Santa Clara University campus. New initiates included twenty-two students and six honorary members. The chapter is proud that all of the Mechanical Engineering professors have become Pi Tau Sigma members. Dr. Sanchez serves as faculty advisor.

The Santa Clara Alpha Epsilon chapter members will work to promote and exemplify the high ideals of Pi Tau Sigma. The chapter plans to work closely with the ASME student section in its functions and with the Mechanical Engineering Department in service projects such as Freshman Orientation and Preview Day.

A long-term project will be the retrieval of a Montgomery glider plane, one of two in existence, for display at the Santa Clara University campus. The plane was developed by John Montgomery, a pioneer in aviation and SCU faculty member at the turn of the century.

The 2021-2022 academic year was challenging for the Alpha Epsilon chapter. Although our advisor, On Shun Pak, was unable to participate in our events in person at any point during the year. That being said, we are extremely grateful for his continued online presence and support. We are also extremely proud of the efforts contributed by our senior cohort, who worked tirelessly to run the chapter this year.

This year, the Alpha Epsilon Chapter of Pi Tau Sigma had a relatively quiet year regarding events. Our senior cohort was one of the smallest in the history of our chapter, with only 6 active members. Even still, the chapter participated in multiple events held by the School of Engineering at SCU. One of the chapter’s major goals was to help assimilate the first and second-year Mechanical Engineering students into the School of Engineering following 2 years of classes being fully online. Our participation included running a table at three student involvement fairs during the fall, winter, and spring quarters. Even though we could not ask any of those students to apply, we hope that our presence at these events truly expressed our support and helped to create a welcoming environment for our fellow Mechanical Engineering students.

The main event hosted by our chapter this year was the “MECHA Design Contest”, which lasted from December 2021 through February 2022. With funding from the SCU School of Engineering, we organized a T-Shirt design contest open to all Mechanical Engineering students and staff. Each participant was asked to create an artistic design for a shirt (front & back) emblematic of the Mechanical Engineering department. The winning design would be printed on a  T-Shirt and mass-produced for students and staff free of charge. A secondary contest was also organized to design a new background for the Mechanical Engineering department office placards. The winner of each respective design contest was awarded a $100 cash prize. The contest was announced before fall quarter finals week in early December. Submissions were made due by mid-January, and a ceremony was held in early February where the winners of each contest were announced and prize money was awarded. The award ceremony/social was a major success with over 100 students and staff from the department in attendance.

In February, we were extremely excited to initiate a small but passionate group of junior Mechanical Engineering students into Pi Tau Sigma, and we are confident that they will bring a diverse array of ideas and goals for the coming academic year.

The Alpha Epsilon chapter graduating seniors feel encouraged by the initiative and energy of the junior cohort, which will assume leadership duties for the 2022-2023 academic year. With Dr. Pak leaving on sabbatical, we are also excited to announce the esteemed Dr. Mark Godfrey Mungal as our new chapter advisor for the coming year. We are confident that he and the new leadership team will bring a wealth of fresh perspective and energy to our chapter.

The 2020-2021 academic year was conducted online for longer than anticipated, with students returning officially to campus only in Spring Quarter, but the Alpha Epsilon chapter is proud of its members' resilience and leadership presence in the School of Engineering. Alpha Epsilon hopes to continue its work in person next year and build off successes from this year and last. Alpha Epsilon is also extremely grateful to its faculty advisor On-Shun Pak for his encouragement and support this year.

Before the academic year, in August of 2020, a few Alpha Epsilon membres held an informal Q&A for incoming first-year mechanical engineering students. This was part of the university’s School of Engineering Welcome event. About 35 first-years attended the event to get useful information on how to make online learning successful.

The rising seniors in Pi Tau Sigma also coordinated a social event for all cohorts in the mechanical engineering department. The event, referred to as “ME Time,'' was used to engage mechanical engineering undergraduates in a casual web-based game night. In spite of taking place during a midterm week, about 20 undergraduates attended the event between PTS and non-PTS members. At the end of the event, a small club-funded prize was awarded to the winner of the game, and the rising seniors felt encouraged to plan similar social events in person during this coming year.

The Alpha Epsilon chapter graduating seniors feel encouraged by the initiative and energy of the junior cohort, which will assume leadership duties for the 2021-2022 academic year. The chapter plans to continue working with other groups within the School of Engineering to ensure successful events in the future.

Throughout the 2019-2020 academic school year, the Santa Clara Alpha Epsilon chapter focused on creating cohesion with the entirety of the mechanical engineering department while also promoting a path for post-undergrad work. For instance, although Pi Tau Sigma can hold events that can be reserved for members-only, most events were expanded to include other mechanical engineering students. As future leaders in the industry, we understood that by working for the entirety of the student body, we could achieve a larger impact and help other students who might be struggling with their academics or post-graduation plans. As a result, it was with this mindset that events were planned in the 2019-2020 academic year.

Most events for our organization this year were reserved for the second half of the year so that new members could get an introduction to the impact that Pi Tau Sigma can have. Initiation was held on February 6th where we welcomed the bright intellectuals of the junior class. From initiation, we held a celebratory dinner at a restaurant near the university where we bonded and got to learn about each other's interests. Additionally, during the Winter Quarter, we also held the PTS Networking Event on February 27th. This event was aimed at helping students of junior and senior standing grow their network within the mechanical engineering industry in Silicon Valley. Nine industry professionals were invited to speak and answer questions at a panel from students and PTS members. Following this strictly formatted component, an informal dinner was held where professionals were encouraged to sit with students and share their professional experiences. From this event, the organization received a multitude of positive feedback from students, faculty, and industry professionals.

Nevertheless, due to the circumstances of the Covid-19 pandemic, the University moved classed online before the beginning of the Spring Quarter. This meant that we had to cancel any tours, events, and fundraisers that would be planned during this time. Luckily, one of our new initiates took the lead in organizing a virtual event for mechanical engineers on May 15th. Students across mechanical engineering were invited to join a zoom session where faculty and students mingled and played virtual games to create cohesion within the department. Prior to this event, the organization had voted on a new board, which had met to transfer the organization's information. A final officer and new officer board meeting was held right before the school year ended to ensure a positive transition.

During the 2018-2019 academic year, active members were involved during the Fall Quarter as student volunteers for the School’s Open House day, interacting with interested high school students and representing the school as a whole. Additionally, an internship information panel was organized by Santa Clara Alpha Epsilon in order to better assist primarily freshmen and sophomore engineering students in understanding how to be competitive applicants for engineering internships. Similarly, a graduate school application information panel was organized in order to inform primarily junior and senior engineering students about the pros and cons of graduate school as well as assist them in the school selection and application processes. These events made Fall Quarter our busiest!

During Winter Quarter, our initiation of the junior class of mechanical engineering students was held. 11 candidates joined Santa Clara Alpha Epsilon, and these candidates and active members joined together afterward to eat and get to know each other. After initiation, there were several volunteer activities for members within the School of Engineering. Members participated in Santa Clara University’s Engineer’s Week as well as volunteering in an admitted student calling campaign where they answered questions for high school students debating whether or not to attend Santa Clara.

During Spring Quarter, students once again volunteered for Santa Clara’s Preview Days, a weekend dedicated to welcoming admitted students and providing tours and information to them. Elections were held on Tuesday, May 22 to determine the officer board for the next year. A final officer meeting was then held to provide guidance to the society’s new officers and ensure a smooth transition.

During the 2017-2018 academic year, active members were involved during the Fall Quarter as student volunteers for the School’s Open House day, interacting with interested high school students and representing the school as a whole. Additionally, a tour and info session for Space Systems Loral were co-organized by Santa Clara Alpha Epsilon, as well as the student chapter of ASME on campus.

During Winter Quarter, our initiation of the junior class of mechanical engineering students was held. 11 candidates joined Santa Clara Alpha Epsilon, and these candidates and active members joined together afterward to eat and get to know each other. After initiation, there were several volunteer activities for members within the School of Engineering. For Engineer’s Week, Pi Tau Sigma sponsored a paper airplane competition as part of an engineering carnival. Members also participated in an admitted student calling campaign, to answer questions for high school students debating whether or not to attend Santa Clara.

Spring Quarter was the most active quarter, thanks to both junior and senior members participating in events for the entire quarter. Students once again volunteered for Santa Clara’s Preview Days, a weekend dedicated to welcoming admitted students and providing tours and information to them. Elections were held on Tuesday, May 22 to determine the officer board for the next year. An event called “Life after SCU” was held on May 31, where several alumni and faculty were invited to come and sit on a panel for current undergraduate mechanical engineering students, answering questions about the different paths that one may take upon receiving their bachelor’s degree, and how to go about pursuing these paths. Finally, a Senior Dinner was held to congratulate those graduating from Santa Clara.