With the twentieth century came the realization that honor societies made a
definite contribution to the department and that membership required active
participation. Pi Tau Sigma came into being on March 16, 1915, at the University
of Illinois. A similar organization embarked November 15, 1915, at Wisconsin,
and other local organizations (such as the Carzeuran of Purdue) were soon to
become active.

In ten years Pi Tau Sigma grew to six chapters in the Midwest (Illinois Alpha,
Wisconsin Alpha, Purdue Beta, Minnesota Gamma, Illinois Delta, and Missouri
Epsilon). In 1925 the expansion continued to the east with the Penn State Zeta
Chapter being installed. Six years later the Texas Kappa Chapter, and the following
year the Colorado Mu Chapter established chapters in the south and west.
Also in 1932, the expansion continued southeast to Georgia Tech Nu Chapter. It
was not until nine years later that the first chapter was installed on the Pacific
coast (Oregon State Omega). In twenty-six years, Pi Tau Sigma became truly a
national honorary mechanical engineering fraternity with a total of twenty-five
chapters. During the succeeding four years nine additional chapters were installed.

From 1947 to 1958 forty new chapters were installed. The Chapter-At-Large was
established in 1954. The installations completed through the spring of 2017 bring
the total established chapters to one hundred and seventy-eight.

The Condenser was conceived at the eighth annual Pi Tau Sigma convention held at Illinois Alpha Chapter in Urbana, Illinois, in 1925 when National Secretary-Treasurer John V. Martenis was instructed to issue an annual publication for the fraternity. The issue was dedicated to serve as a common medium of exchange of ideas between chapters. In compliance with instructions, Volume 1, No. I of The Condenser was published in Minneapolis as of June 1926. It consisted of eight, 8 in. x 11 in. pages with white cover and included editorial notes and comments, the welcoming speech of President A. C. Willard to the preceding convention, and news from the Chapters.

Editor Martenis continued the publication each year through Volume VI. During this early period the Condenser grew from eight to sixteen pages as the number of chapters increased and contributions to copy increased. It served its purpose to the growing fraternity.

Because of the established policy of having National Secretary act as editor of The Condenser, National Secretary-Treasurer H. E. Degler took over with Volume VII. At this time the date of issue was established for March of each year. Volume VII, issued from Austin, Texas, was expanded in size to 9 in. x 12 in. and to 14 pages to accommodate increased growth. Pictures of college buildings, detailed convention minutes, and a cover plate of a halftone Condenser appeared for the first time. Again, fulfilling the requests of the convention, Volume VII contained a complete membership roll of the fraternity.

To assist in the work of the National Secretary-Treasurer, the National Vice President twice edited the Condenser. Volume X was edited by E. S. Gray from Columbia, Missouri, in 1936 and V. L. Maleev edited Volume XII in 1938 from Stillwater, Oklahoma. With these exceptions, H. E. Degler continued the editorship through Volume XIV, the Silver Anniversary Issue.

Notable among the issues of The Condenser was the Silver Anniversary Issue, commemorating the twenty- fifth anniversary of the founding of Pi Tau Sigma. It consisted of 52 pages with a cover of aluminum foil. The feature article was the history of 25 years in Pi Tau Sigma.

A revision of the Constitution was made at this time increasing the number of National officers by including two Vice Presidents. The duty of the First Vice President was to edit The Condenser. The first issue under this plan, Volume XV of 1941, was edited by T. G. Estep, Carnegie Iota, from Pittsburgh, Pa.

Volume XVI (1942) through Volume XX (1947) were edited by F. V. Larkin, Bethlehem, Pa., with assistance from the active members of Lehigh Theta Chapter.

Volumes XXIII through XVI were edited by M. S. Gjesdahl, State College, Pa., with the assistance of active members of the Penn State Zeta Chapter and the Purdue Beta Chapter.

Volumes XXVII through XXXII were edited by M. J. Goglia, Atlanta, GA., with the assistance of active members of the Georgia Tech Nu and the Purdue Beta Chapters.

The Condenser grew from an eight page pamphlet dedicated to an exchange of ideas to a magazine of sixty-eight pages (Vol. XXII) incorporating editorials and articles as well as the minutes and pictures of the preceding national convention, the biographies and picture of the recipients of the Pi Tau Sigma Gold Medal and Pi Tau Sigma Richards' Memorial Awards, the pictures and records of all honorary members, a story and picture of the Host University or College for the succeeding convention, and a resume of the activities of all chapters including the pictures of the mechanical engineering building.

With the increased cost of publications, all of which are paid by the national chapter out of the dues received from members, it became necessary to retrench so that effective with Volume XXIII the articles were omitted and effective with Volume XXV the pictures of the buildings were not repeated, as they appear in The Story of Pi Tau Sigma.

At the Thirty-first Annual Convention in 1951 recommendations were made to the editors of The Condenser and The Story of Pi Tau Sigma to avoid duplication.

A special 50th anniversary issue of The Condenser was published in 1965. The issue, edited by J. W. Bayne included several items of historical interest plus greetings from five past National Presidents. 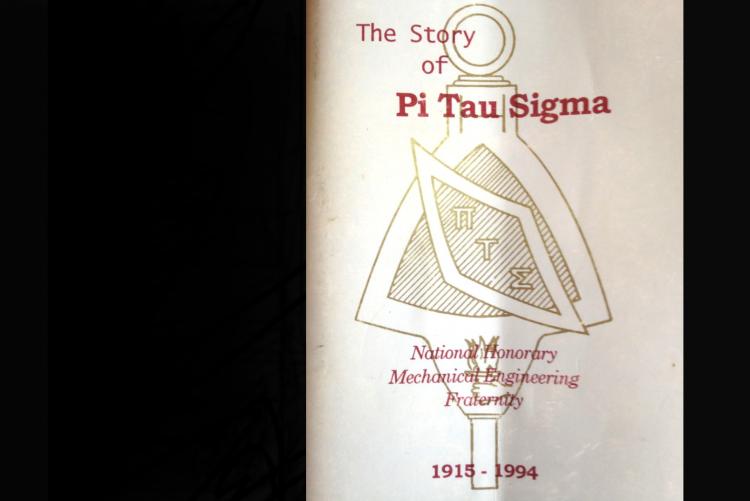