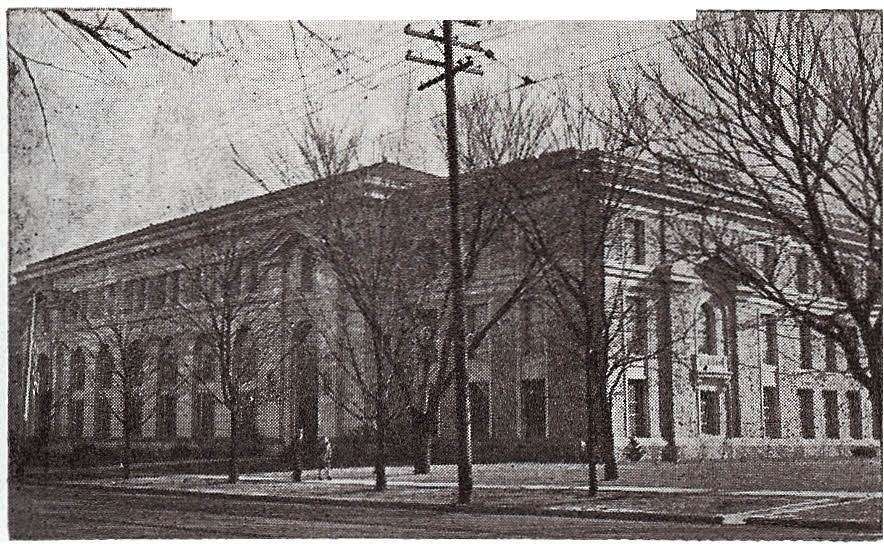 O. C. K. Hutchinson, University of Illinois, and J. B. Wilkinson, University of Wisconsin, met early in 1916 to arrange plans for making the organization national, under the name of Pi Tau Sigma. The coalition took place in Chicago, March 12, 1916, at which the matter of chapter designation was decided and the two chapters become Illinois Alpha and Wisconsin Alpha.

The 2021-2022 school year was a year of rebuilding for our chapter. Unfortunately, due to the pandemic there was a drop off in membership involvement during the 2020-2021 school year. Our goal as an executive board this year was to get that involvement back so in the coming years our chapter would be set up to have an impact not just on the UW Madison student body but the Madison community as well. We held our first in person events in over a year and that alone brought back some of the involvement we had seen before the pandemic. Along with old members becoming more involved we were able to add 14 new members across the fall and spring semester that are already heavily involved in our chapter’s activities.

To help retain this involvement the executive board focused on creating general meetings that were fulfilling for members. This was achieved through inviting faculty selected by the students to speak about their research and how our members could get involved. We had six general meetings in the fall and four in the spring. Each faculty member brought a unique presentation that allowed for a conversation with the members afterwards where both the faculty members and our members in attendance could get to know each other. This allowed for the meetings to be both informational and networking opportunities for our members who want to get involved in research on campus. In addition to meeting faculty, we were invited to a UW Madison ASME meeting to hear one of our former presidents, Jack Tamar, speak about his job at SpaceX. This event was very popular among our members and we hope to do more joint meetings like this in the future. Outside of our clubs meetings we brought back our design team to partner with Cardinal Manufacturing, a student run manufacturing company in Strum, WI. This partnership allowed us to help the students with their designs while giving members of our chapter opportunities in hands-on engineering work.

Overall, this year we laid the groundwork for a chapter in the future that has a greater impact on the UW Madison student body and surrounding community. With the members we have added this year we hope to have that opportunity by being more involved in campus activities, philanthropy, and design competitions. We are excited for what the 2022-2023 school year holds for the Wisconsin Alpha chapter of Pi Tau Sigma.

During the 2018-19 scholastic year at the University of Wisconsin - Madison, Pi Tau Sigma made waves with a very strong year. In the preceding few years, the organization had declined and membership was far below the desired numbers to be able to hold substantial events. In this single year alone, the organization was able to double their numbers, initiating 20 new members!  Along with this great accomplishment, the Wisconsin-Alpha chapter of Pi Tau Sigma was able to make headway in returning to its former state by organizing more fulfilling events for its members. PTS hosted several meetings, which included speaking with professors about their research, coordinating a joint meeting with the American Society of Mechanical Engineers, and organizing a partnership for community outreach. This new partnership is with local Wisconsin high school students in Strum, WI. Over the next year and beyond, Pi Tau Sigma will work together with the student run manufacturing company Cardinal Manufacturing on their varying tasks and provide insight on what it is like to be an engineer. As college students, our members can use this partnership to teach the high school students about engineering design as well as help them create products to solve real world problems in their community. Furthermore this year, Pi Tau Sigma began coordinating with other honor societies in the UW-Madison College of Engineering in hopes of holistically tackling some of the tough engineering problems the university faces. This includes attempting to restore the historic Descendant’s Fountain in the Engineering Mall to working condition after years of disuse and corrosion. These large scale projects are what PTS-Wisconsin Alpha looks forward to continuing into the future with help from the new member base!

Lastly during the 2018-19 school year, Pi Tau Sigma was fortunate enough to send a representative to the PTS national convention in Fort Collins, Colorado and support the event with donations. This experience allowed for our members to begin communication with several other PTS chapters, specifically based in the Midwest, which led to talks of the University of Wisconsin-Madison potentially hosting a Midwest convention and possibly even a national convention in the near future. Looking into the 2019-20 school year, the Wisconsin-Alpha chapter plans to expand Pi Tau Sigma’s presence on campus even further through new events, community outreach, and recruiting even more active members.