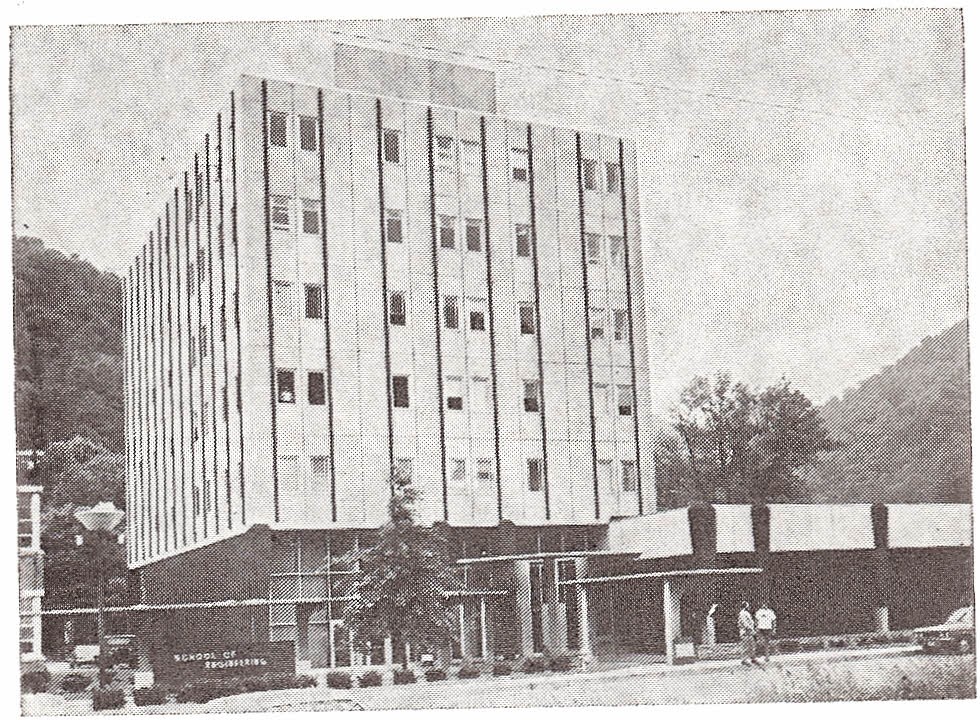 In the' Spring of 1972, sixteen eligible Mechanical Engineering students met with Prof. Lloyd Lee to begin preparation of a petition to the National Council for an active Chapter of Pi Tau Sigma at W. V. Tech.

With full support of Dr. Leonard Nelson, President of the College; Dr. Lyle Blackwell, Dean of Engineering; and other faculty members, the petition was approved and ratified by the other chapters.

The W. V. Delta Theta Chapter was installed on Nov. 3, 1973, by Mr. James Bayne, President; Dr. Suresh Chandra, Vice President; and Prof. Will McKee.
There were 27 charter members which included Dr. Acharya, Chairman of the Mech. Eng. Dept., and Dr. John Miles, Assistant to the Dean and former Chairman of the M.E. Dept., as honorary members.

The 2021-2022 academic year has been one of huge reactivation after the pandemic. The West Virginia Delta Theta chapter was able to resume most chapter activities and suggest future activities and projects for the new executive board. The WV Delta Theta chapter’s membership flourished this year by doubling the number of members in the chapter. This summary will highlight the projects and events for members and the efforts of our executive board that helped in this reactivation.

The first project that was carried out was setting up a Mechanical Engineering lounge on campus in the Fall. This project was led by our chapter president and vice president with the collaboration of our advisor, the WVU Tech Mechanical Engineering Department, and WVU Tech Facilities. An old storage unit room was cleaned, ID keys were obtained by the executive board, and office material was purchased as well as media devices for zoom meetings. This room is currently serving as the meeting point for all the Mechanical Engineering clubs and chapters.

Likewise, our president and vice president could attend in person the Pi Tau Sigma National convention that took place in April in Chicago. It was an outstanding opportunity to meet the board of directors and Pi Tau Sigma members from other schools and learn about their chapters. Our chapter would like to thank the board of directors and the UIC members for this opportunity as well as for its fantastic organization.

The chapter could also recognize the Mechanical Engineering professor award for the first time since the pandemic started. Our West Virginia Delta Theta members selected Dr. Yogendra Panta as the winner of this award. His commemorative plaque was ordered before the end of the Spring 2022 semester. All the faculty and students from the Mechanical Engineering department were invited, and lunch was provided after the ceremony.

Finally, we could address an old pending chapter activity to conduct some workshops in local middle schools to promote STEM from an early academic stage. This activity could not be approved until May due to Covid concerns. Despite some members leaving due to summer vacation, the project was adapted accordingly. Some members of Pi Tau Sigma collaborated with the Fluid Power Club and attended Park Middle School on Thursday, May 12th to explain the fluid power vehicle manufactured in-house by both clubs. It is important to notice that some Pi Tau Sigma members are also members and part of the executive board of the Fluid Power Club.

The chapter plans to effectuate next Fall the activities and projects voted in the last meeting of the semester. During this meeting, a new executive board was elected since members graduated.

During the 2019-2020 academic year, the West Virginia Delta Theta chapter had a very peculiar year, as I am sure most chapters did. Fortunately, we were able to hold an initiation in the Fall semester where we inducted 7 Juniors into our chapter. We held many meetings and had big events planned for the Spring semester, including workshops at local elementary schools, an engineering banquet and professor of the year awards, as well as assisting ASME with their annual engineering design expo.

Our Fall initiation was successful as we initiated 7 new members who were all Juniors, doubling the size of our chapter. This was fortunate as we were not able to hold a Spring initiation due to the registrar’s office not releasing the list of eligible members until after our campus had closed.

As more than half of our members are also athletes with their season being in the Fall semester, our chapter did not have any events or activities planned in the Fall as our members were always travelling for games. We did however begin planning events for the Spring semester.

For the Spring semester, we had organized with a local elementary school to conduct some workshops in late March to help get kids interested in engineering. There were going to be three workshops, with 4 different members going to each workshop, where we would host fun activities such as a bridge building competition using popsicle sticks.

We had also begun to organize an engineering banquet for all engineers that were part of their respective engineering society, e.g. ASME. The date we had set for this banquet was April 23. Our idea was to try and increase campus involvement and engineering society members by hosting a free dinner and giving out t-shirts to try and get more engineers to join their respective societies. We also planned to do the professor of the year awards at this dinner for each department.

Finally, we were going to assist ASME when they hosted their annual engineering design expo in late April. The design expo had struggled slightly since the university shifted campus in 2017, and we wanted to help ASME to get it back to where it used to be by providing them with some extra support.

As the national convention was in Rochester this year, we were lucky enough to be able to drive there and have three members attend. We were able to learn a lot from this experience and we were very grateful for the opportunity.

Provided next semester starts on time, we will be having an initiation for the eligible members that should have been initiated in the Spring. We look forward to seeing some familiar faces at the next convention in Chicago. 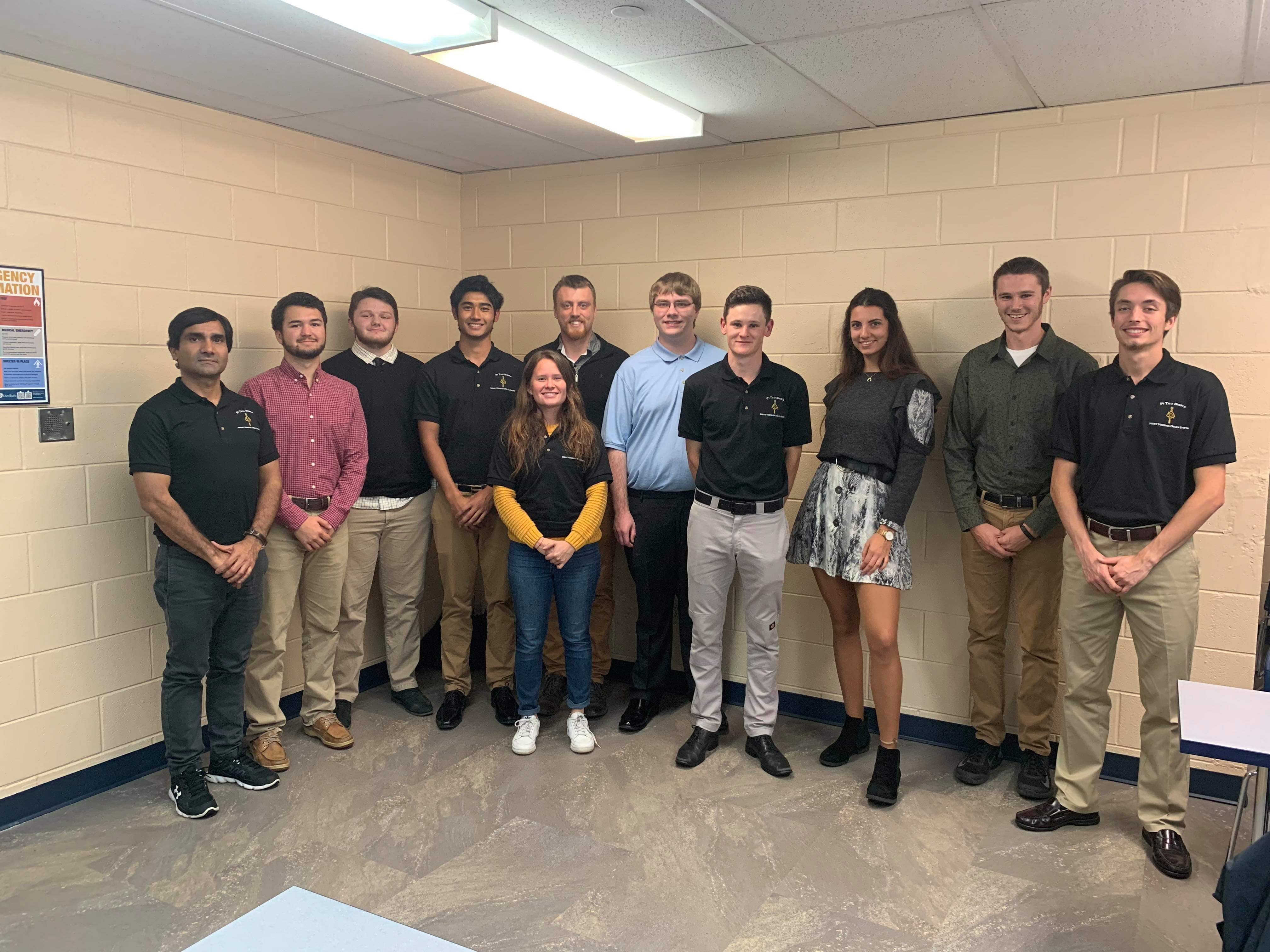 For the 2018-2019 academic year, the West Virginia Delta Theta chapter of Pi Tau Sigma was very active; we conducted two initiations, held numerous meetings, and sent two executive members to the national convention in Fort Collins, CO. Throughout the course of the academic year, it can be proudly stated that Pi Tau Sigma was the most active student organization in the Mechanical department. We kept strong working relationships with our advisor as well as other members of the department.

To start the Fall Semester the West Virginia Delta Theta chapter held a BBQ social.  This was a fun social event to kick off the academic year where members gathered and were able to socialize with other members in the organization.

Our chapter inducted four members in the fall semester and three members in the spring semesters for seven new members this academic year.  All students who were offered membership accepted the invitation to join the chapter. We attribute this high membership rate to the small school atmosphere where potential members typically have a good relationship with the chapter advisor and many current members.

We had two members attend the national convention in Fort Collins, CO. The chapter submitted funding requests to the dean of engineering as well as the Student Government Association for assistance with the expenses. With the travel stipend as well as funding from these two sources we attended the convention using little of our own funds. This allowed us to use the funds from initiation fees to give back to our members in the form of polos and meals after initiations. All the members who attended the convention enjoyed the experience and came back to campus with great ideas about how to improve our chapter.

Three Pi Tau Sigma members and our chapter adviser volunteered at a local elementary school to teach about the engineering design process.  During this outreach event, Pi Tau Sigma members lectured to a 5th grade class about the engineering design process.   Following the lecture, a design challenge was presented to the classes in which the kids were challenged to design and build a paper table that could support a large book.  This event was a great way for our members to get involved and make a difference in the local community.