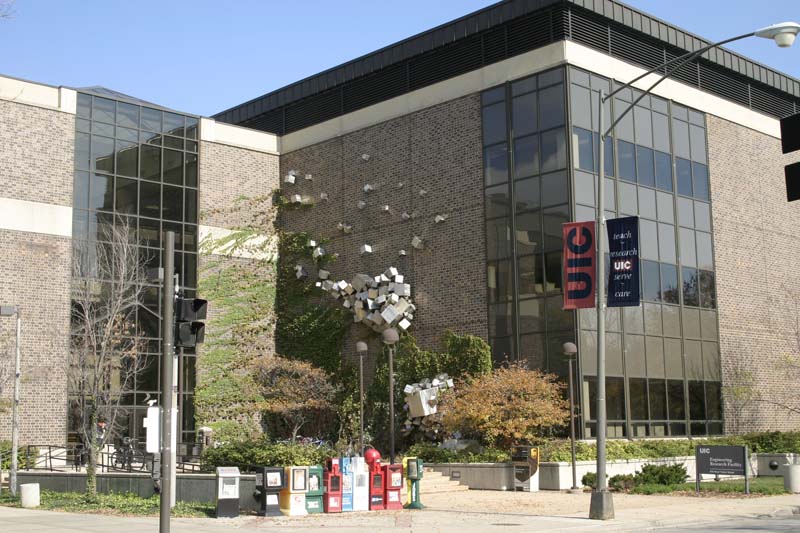 UIC Alpha Sigma was formed under the direction of Dr. Mun Choi., who later went on to serve as National President of Pi Tau Sigma. UIC was chartered on October 23, 1999, at the Georgia Tech National Convention, in Atlanta. Scott Retterer and Thomas Juliano were the first two initiates, who went on to receive their Ph.D. from Cornell and Drexel University, respectively. There were many outstanding students at UIC, and the formation of the chapter instilled pride to those who believed in the mission of a great urban institution. Since then, UIC Alpha Sigma has been part of many service and outreach programs in the Chicagoland area, promoted academic excellence on campus, and even hosted the 2011 National Convention.

In the beginning of the ‘21-’22 school year, COVID precautions were still very strict and the future was uncertain. Due to this, org activities were very limited; room reservations were difficult to make, student in-person availability was scarce, and university guidelines prevented many potential activities. What could be done, however, was online events. In normal conditions, Pi Taus would meet on weeknights to do homework, study, and socialize. These are our Homework Nights. We moved Homework Nights onto a Discord server, which allowed for text and video chat and screen sharing. Attendance was taken by screenshotting the server roster. These events were almost weekly. Special events were limited to on-campus events that could be monitored by UIC staff. To abide by these rules, Bowling Nights in the UIC alley were held. No photos were taken during these events as all the members present were enjoying themselves in the moment. Besides these events, UIC Alpha Sigma also hosted the Pi Tau Sigma National Convention from April 1st to April 2nd. The Convention involved a Reception Dinner, a Game Night, Breakfast, a Board Business Meeting, a UIC Alpha Sigma initiation, tours of UIC, the first Drone Technical Challenge, Dinner, and a Bowling Night. The Fall ‘21 Initiation was held online and welcomed 10 new members. A screenshot of the Zoom participants was used to take attendance for the event. A photo of our President, Secretary/Treasurer was taken by our Vice President after the initiation had ended. We established a way for new members to submit their signatures so we could paste them into the chapter’s Log Book . A second initiation took place during the 2022 Pi Tau Sigma National Convention and although no photos were taken during the ceremony, a group photo involving the new initiates were taken promptly after. Signatures were taken that day soon after. The final initiation during the year was to make up for one candidate's unavailability during the convention. A screenshot of the Zoom room was taken and the new member signature was pasted into the Log Book at a later date.

With the Coronavirus Pandemic in mind, the Pi Tau Sigma UIC Alpha Sigma Chapter strove to engage our members, provide them opportunities to network with each other, and to induct new members to ensure a healthy continuation of the Chapter. In the Fall semester, the Chapter held an initiation through Zoom on October 21st, 2020. Three new members were inducted. In the Spring semester, two initiations were held. One on March 19th that saw seven new members inducted, and a makeup initiation on March 25th that saw one new member inducted. In the fall semester, two general body meetings were held with attendance of about ten people each. These events served as an opportunity for members to get updates on the organization and ask any questions they had, especially regarding the pandemic. In the Spring semester, only one general body meeting was held at the beginning of the semester. This event had an attendance of about 10 people as well. The Chapter held a Career Fair Prep night through Zoom in the Fall, but there was almost no attendance, so this event was not continued in the spring. The organization held two game nights, one in fall and one in spring. This event was initially only for members when it was held in the fall. The event had an attendance of 5 members. In the spring, the event was opened to people outside of the college as well with an attendance of about 7-8 people, most of them members. In both semesters, homework nights were held biweekly. Attendance would vary widely with more attendance during less busy weeks. Attendance was about 3-12 members throughout both semesters. This was generally the Chapter’s most attended event as it offered the members a rare chance (keeping in mind the pandemic) to informally talk to each other and relax. Finally, the Chapter had 5 members attend the PTS Virtual National Conference held during the Spring.

Pi Tau Sigma UIC Alpha Sigma hosted events that both promoted the professional development of mechanical engineering and improved the education of the mechanical engineering curriculum. In Fall of 2019, a career fair prep event was held to assist members and nonmembers in preparing for the upcoming career fair. The event served as a method for attendees to network while also being provided mock interviews, resume reviews, and LinkedIn headshots. 30 people attended the career fair prep event and the most used services were the mock interviews and the free LinkedIn headshots. To improve the knowledge of the mechanical engineering curriculum, homework nights were hosted by our student organization. We reserved a room to allow attendees to have a private space to study and/or obtain help with specific classes while also providing snacks and refreshments. The events were hosted biweekly and the attendance for Fall 2019 ranged between 8-12 people. Lastly, the final major event of the Fall 2019 semester was initiation, where in total, 8 members were initiated. The Spring 2020 semester was cut short due to COVID-19, but some events were still planned. Homework nights continued in Spring 2020 with an attendance of 6-10 people biweekly. Initiation for Spring 2020 saw an improvement, where 14 members were initiated into the UIC Alpha Sigma chapter. More events were planned, but due to the recent pandemic, any future events for the semester were cancelled.

The Pi Tau Sigma Alpha Sigma initiation occurs twice a semester. To qualified to be inducted into PTS, members must have a 3.5/4.0 GPA or higher. Those who qualified were sent an email from the president of Pi Tau Sigma Alpha Sigma.The Fall induction occurred on October 18th, 2018 and inducted 23 new members. The Spring induction occurred on March 14th, 2019 and inducted 20 new members. There were several events held throughout the year. To start with,on September 14, 2018 the first PTS Alpha Sigma general body meeting was held. The president conducted this meeting where he spoke to the current members on what to expected for the semester as far as changes or activities. New officers were also introduced in this meeting. PTS Alpha Sigma held many homework nights throughout the semester. This was an event where members/nonmembers can come to a reserved room to work on homework or study with fellow members and classmates. This was open to every engineering student. Coffee and snacks were also provided. A big event the UIC PTS has is our semester bar crawl. On April 26th2019 we conducted our semesterly bar crawl social event. We had great attendance from both members and nonmembers at the event and several people who couldn’t make it still participated by buying a shirt or by helping to sell the shirts. The last event in the Fall was held on November 28th. PTS held its final GBM with a bent polish event. This event consisted of new members to polish their new PTS bent and glue them onto a plaque. The current members also received their certificates if they haven’t done so yet. The first major event for the Spring semester was from February 15thto the 17th, UIC Alpha Sigma participated in the PTS national convention held at Colorado State University in Fort Collins, Colorado. UIC brought 10 members to this conference where they had the opportunity to network among other PTS members from cross the country. UIC PTS had a guest speaker come to speak to the engineering body. One of our greatest PTS events of the semester was a guest speaker event held on April 23rd, 2019. Open to members and nonmembers, Scot Greenlee, the Senior Vice President of Engineering for Exelon Nuclear, spoke to 17 of our members and approximately 30 additional nonmembers about keys to success as an engineer. UIC PTS hosts a bar crawl every semester. Members sell shirts for a week promoting the bar crawl that is open to everyone. There was 40+ students go to the bar crawl this academic year. Another form of member activity this semester was peer tutoring. We had several members tutoring fellow members and nonmembers. In brief interviews with the students who received tutoring, they indicated that they felt the tutoring provided by our members was instrumental to their success in the classes for which the received tutoring in.

UIC Alpha Sigma 2017-2018 academic year consisted of monthly chapter meetings in which members meet to interact with officers and members alike. The meetings served purpose to inform members on resume building, LinkedIn tips, society attendance, continuing education programs, and networking. During chapter meetings annual events of “Bent & Plaque Polishing”, “Bar Crawl”, and the newly created “Homework & Coffee Night” were made aware to students. These events are created in order to raise funds for future events and for creating more academic possibilities for members. The encouragement to invite non-PTS members was made as an outreach to the UIC Academic Body, for these social outings. PTS also hosted a mini-food drive during the holidays in support of the community and for students. Alpha sigma in the academic year had inducted 15 new members who upheld the beliefs of the society and actively attended meetings, including joining the trip to the national convention. In this year, with the help of UIC Alpha sigma and UIC funding, the chapter was able to send 12 members to The National PTS Convention, in Miami, FL. Members there were able to take tours of the engineering department labs, join the conversation in progressing the society, dine with other members from around the country, and listen in on new developments being paved in the pursuit of space exploration. The attendance has steadily increased over the years, and PTS wishes to continue to encourage members to attend, further conventions. The chapter believes it is extremely beneficial for future members to gain the experience to interact with other chapters, become knowledgeable in running a successful chapter, and meet other aspiring engineers from around the globe. Alpha Sigma also hosted its first regional conference, which included tours provided by SAE, Dr. Megaridis, Dr. Pan, and Dr. Abiade. Speeches were also hosted by two previous UIC Alpha Sigma Alumni Presidents; James Lirot and Garrison Buss. Three different Illinois Universities were in attendance, including UIC PTS members who came to support and lead on tours. The Midwest convention was well received by students and they found encouragement in the possibility of themselves hosting in the near future. At the end of the academic year an exit form was sent to all active members who were graduating for possible outreach and experience with society. Encouragement to stay connected is valued and working with previous board members help new board leaders lead the society to meet the requirements of its members.