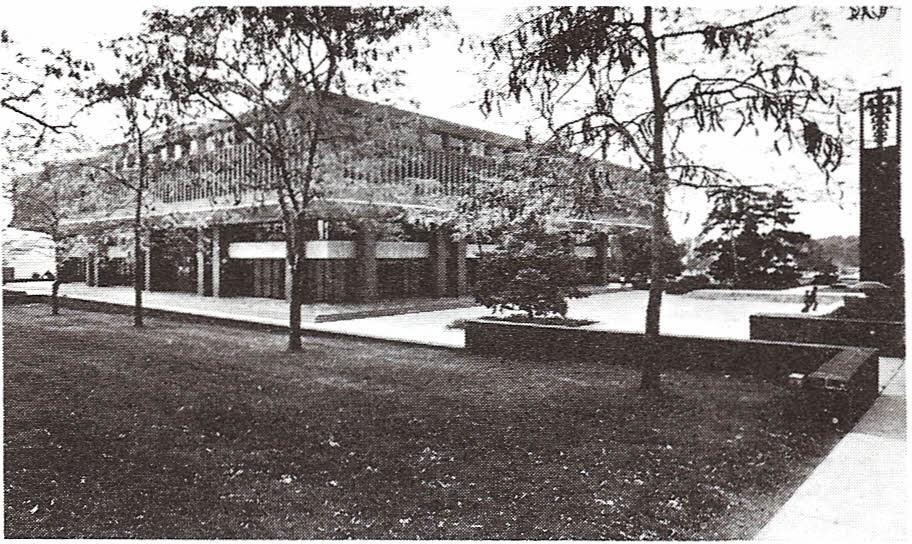 All G.M.I. students work on the co-op plan in alternating twelve-week sections of work and study. For this reason two slates of offices were elected so that the separate A and B sections of the student body could operate autonomously under the single charter. Intersection liaison is maintained through the recording secretaries.

As the largest single curricula group on campus, the members recognize their responsibility for promoting optimum student-faculty relations and stressing scholarship in the realm of engineering. This is accomplished in different ways in each section but both strive to promote the highest ideals of Professionalism in mechanical engineering.

The university's name was formally changed to Kettering University on January 1, 1998, in honor of Charles Kettering, and the chapter assumed the name of Kettering Delta Chi.

The Kettering Delta Chi chapter of Pi Tau Sigma at Kettering University held a variety of events and meetings during the 2019-2020 calendar year. Initiations were held in the fall, and a guest speaker was hosted on November 12th. An informational meeting was also hosted, which informed prospective members of the benefits that Pi Tau Sigma could add to their professional life. The chapter initiated 34 new members in December of 2019.

In February of 2020, the president of the Delta Chi chapter, Ryan Messock, attended the national convention in Rochester, New York. This experience aided in keeping the Kettering University Chapter of Pi Tau Sigma in good standing, and was a useful event for finding further ways to promote the society.

As mentioned before, our chapter hosted a guest speaker in the fall semester. Dr. Jody Hall, who is the Vice President of Automotive Program and American Iron and Steel Institute, provided an in depth lecture in her field, and the path she took to get where she is today. Emphasis on networking was placed during this event, and was attended by many members of the Pi Tau Sigma society.

To finish the year, elections were held to fill the e-board positions. This election was held in June 2020 . The new e-board consists of Donovan Hoffman (President), Laura Lund (Vice President), Cavanaugh Penberthy (Treasurer), Levi Bischer (Corresponding Secretary), and Amelia Ostdiek (Recording Secretary). This year proved to be difficult for this chapter of Pi Tau Sigma, since the pandemic shut down all in person classes for all students, and therefore not allowing any extra events to be hosted. For the time we were able to work together, this e-board enjoyed the community and efforts we were able to undertake to support the mechanical engineering community at Kettering University. 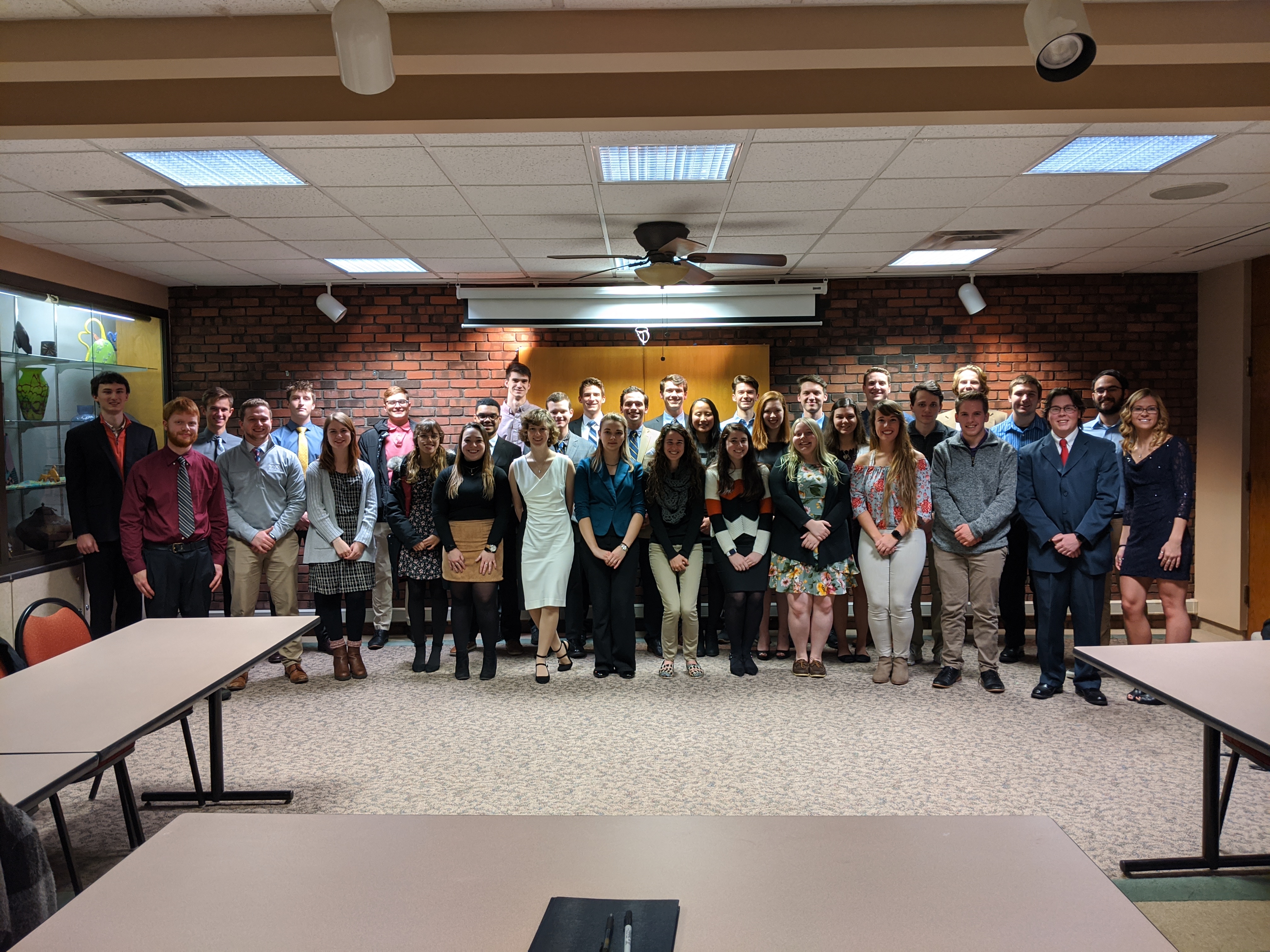 The Kettering Delta Chi chapter of Pi Tau Sigma at Kettering University held many various events and meetings during the 2018-2019 calendar year. The chapter held several meetings, initiation in the fall, and held weekly study tables for the members. The multiple meetings were a great way to attend to necessary business, gather ideas for events and volunteering, get to know other members better, and network. The chapter initiated 24 new members in December of 2018.

In the new year, the president of our chapter, Forrest Baker, attended the Pi Tau Sigma National Convention February of 2019. He attended many events and networked with many great people. At the convention, he specifically took an interest in how to engage students in an honors society effectively.

Our chapter organized study tables as the main focus of the society. Many students and current members attended to sharpen their academic skills. It was identified that students were struggling in classes MECH 210 and MECH 212. Dr. Echempati worked with Forrest to set up study tables for his classes. Study tables were held every week on Wednesdays from 7-9pm for the entire term. This was an opportunity for upperclassmen to help those underclassmen in classes. Since Kettering is a smaller university, there is no tutoring for classes much more than Calculus I and Physics. This provided the opportunity to help other students who usually do not get this support.

To close out the year, there were new e-board elections and carryover on June 7th, 2019. The new e-board consists of Ryan Messock (President), Rachel Zaprawa (Vice President), Rachel Brown (Treasurer), Jason Green (Corresponding Secretary)&(Recording Secretary). The chapter has had a lot of fun this year as we have formed a community in ourselves as well as supported the mechanical engineering community at Kettering University.

The Kettering Delta Chi chapter of Pi Tau Sigma at Kettering University held many various events and meetings during the 2017-2018 calendar year. The chapter held many meetings, initiation in the fall, a charity event, two school wide events, and chapter picnic for members. The multiple meetings were a great way to attended to necessary business, gather ideas for events and volunteering, get to know other members better, and network. The chapter initiated 20 new members in December of 2017. A celebratory lunch meeting was held shortly after.

In the new year, the president of our chapter, Andrea Salutes, attended the Pi Tau Sigma National Convention February of 2018. She attended many events and networked with many great people. At the convention, she specifically looked for new ideas on how to better our chapter and leave good footsteps for future members and executives.

For charity, the executive members, along with a few member volunteers, hosted a Pi Tau Sigma canned food drive at Kettering University. The can food drive lasted for two weeks, starting on May 23rd and running through June 6th. Members created flyers for advertising and put boxes around the school for can collection. Then the e-board collected the donated food and brought it to the local food bank.

As mentioned, our chapter organized two university wide events. The first university wide event was called “Evaluating the Offer” organized by the Pi Tau Sigma e-board with Allan Outlaw of Tenneco Inc. At this seminar students learned the next steps in post-graduation life in regards to receiving job offers as well as what to expect in a typical job offer and how to effectively negotiate. This event included organizing a date, time, and subject with Allan Outlaw, advertising, and facility organization. The second school wide event was a honor society expo co-hosted with Tau Beta Pi. Contribution to the event included coordinating the facilities such as communicating with faculty for permission of the event, organizing the time, layout, and other details of the event, as well as organizing the setup on the day of the event. Tau Beta Pi communicated with other honor societies and advertised for the event. It was very successful, with about 8 honor societies with booths and many students coming to learn more about each society.

The chapter held a chapter picnic for the current members of Pi Tau Sigma. This was a chance for members to get to know each other and celebrate what the chapter represents. Lunch was served outside at the campus center at Kettering University.

To close out the year, there was new e-board elections on June 6th, 2018 and a carryover dinner on June 11th, 2018. The new e-board consists of Forrest Baker (President), Isabella Barrett (Vice President), Austin Plave (Treasurer), Peter Morel (Corresponding Secretary), and Matthew Kirk (Recording Secretary). The chapter has had a lot of fun this year as we have formed a community in ourselves as well as supported the mechanical engineering community at Kettering University.