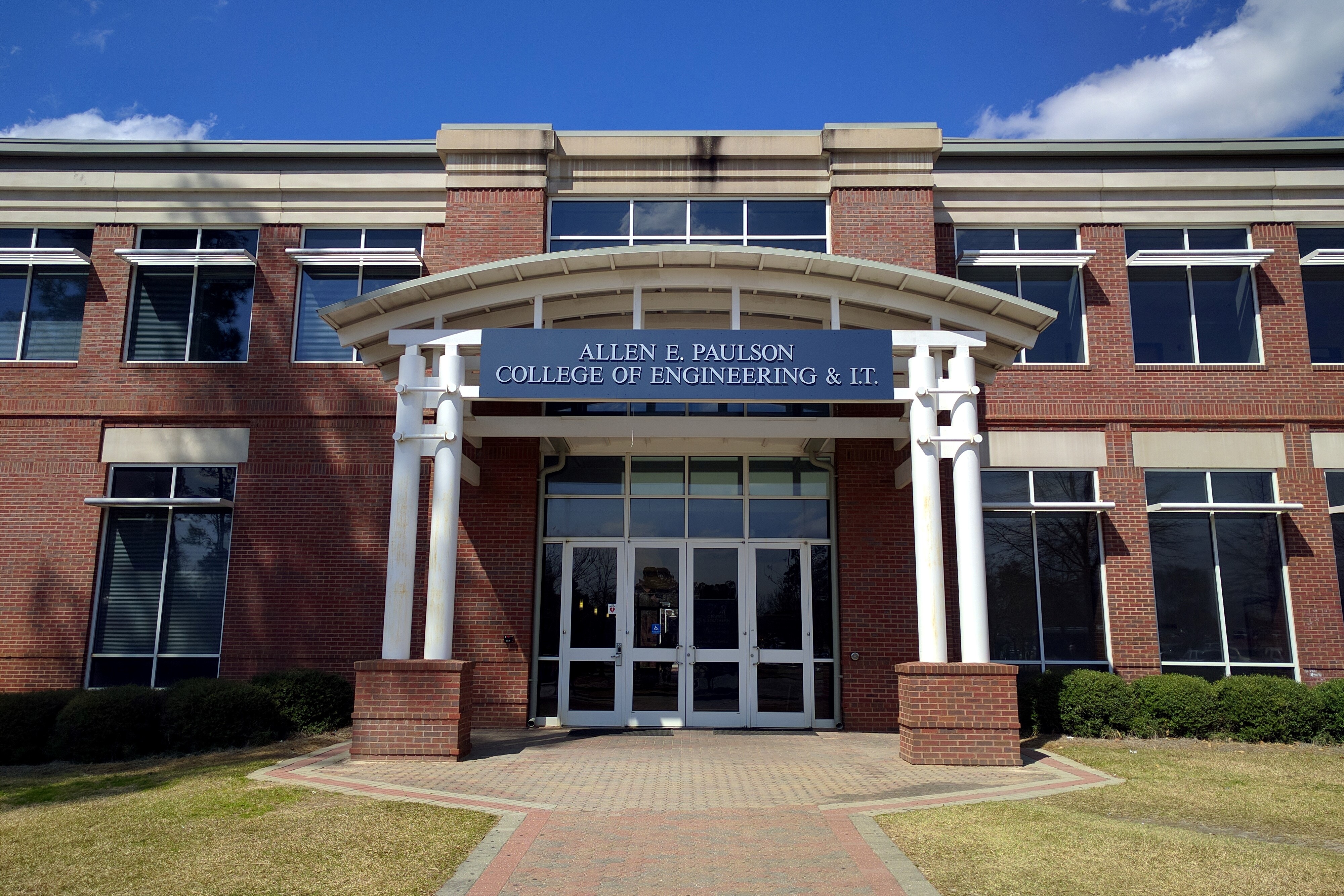 The Department of Mechanical Engineering at Georgia Southern University first received accreditation from ABET (Accreditation Board for Engineering and Technology) in Fall 2013. Shortly thereafter, the Chair of the Department, Dr. Brian Vlcek, approached Dr. David Calamas, an Assistant Professor in the Department, about establishing a local chapter of Pi Tau Sigma. Dr. David Calamas finished preparing the formal petition in Fall 2014 with formal letters of support from the Department Chair, Dr. Brian Vlcek, as well as from the Associate Dean of the Allen. E. Paulson College of Engineering and Information Technology, Dr. David Williams. The petition was also supported by fourteen undergraduate students who were eligible members of Pi Tau Sigma. The petition was submitted to Dr. Alex Moutsoglou, the Secretary Treasurer of Pi Tau Sigma, on December 29th, 2014.

The chapter, Georgia Southern Beta Iota, was unanimously approved on January 23rd, 2015 and is the 177th chapter chartered since the founding of Pi Tau Sigma on March 16, 2015. Georgia Southern Beta Iota was officially chartered on February 28th, 2015 at the Centennial Convection hosted by the Illinois Alpha chapter at the University of Illinois at Urbana-Champaign. In attendance at the convention were Dr. David Calamas, as faculty advisor, as well as Alexander DeLoach and Robert Wray who represented the fourteen students that supported the petitioning process.

The first formal student President of the Georgia Southern Beta Iota chapter was Jennifer Shaffer who was unanimously elected by her peers in Fall 2015. Under Jennifer's leadership, the local chapter was awarded the "New Student Organization of the Year" by the Student Government Association (SGA) for increasing effectiveness and involvement with campus life during the 2015-2016 academic year. The chapter again won the award for the 2016-2017 academic year. In addition, Georgia Southern Beta Iota was nominated for the Outstanding Service Award at the 2018 Annual Convention hosted by Miami Sigma Upsilon at the University of Miami.

During the 2020-2021 academic year, adaptation and accommodation were two key factors of the organization. Throughout both the spring and fall semester, all meetings were moved to an online format. We hosted these meetings bi-weekly with the goal of allowing people to interact while social distancing. The organization hosted trivia nights and riddle nights on zoom where students got together to compete for a free t-shirt.

In addition to this, orientation and induction ceremonies were held online for new members to the organization. These induction ceremonies were held on October 19th, 2020, and on April 14th, 2021. A total of 21 new members joined this year. The requirements for the new members were to have 2 volunteer hours for this year, 1 wings point, and 2 meeting points. For the returning members, the requirement was 4 volunteer hours, 1 wings point and 5 meeting points per year. The requirements were halved from last year as an adjustment for the pandemic. These requirements will return to their normal state for the coming year.

Members were encouraged to participate in volunteer opportunities organized by the school, such as Serve912. This opened the door for many different community service projects such as mentoring/tutoring kids at nearby schools, writing notes for students with disabilities, and assisting nursing homes in taking care of the elderly.

The organization hosted two speaker events during the year. One was composed of members discussing their experiences so far in the mechanical engineering field. They talked about their co-ops, internships, and research, explaining what they do, how they got the position, and what they enjoy about it. The other speaker was a Senior Equipment Engineer who works at Tesla. He came to talk about what he does, what projects he has worked on, and gave advice to the members.

Lastly, the organization raised money through the selling of old t-shirts. These Beta Iota chapter t-shirts were from previous years and were sold to the members of the organization at a discounted price since they had older years on them. Older pull-overs that were not specific to Pi Tau Sigma were also sold to any of the students at Georgia Southern

This year’s activities were planned with longevity in mind and making impressions among our campus and among the other chapters of Pi Tau Sigma, nationally. This became effective in fall semester when we built a dam for STEM Fest, an event for kids K-12 to come and learn something new about science and engineering. We had our members collaborate and build a small interactive dam as a volunteering project, so kids could observe how hydroelectric dams exploit water’s mechanical energy to produce clean electricity. This was furthered by allowing them to “flood” the dam to keep them engaged and interested. In addition to this special volunteering project, we had periodic Habitat for Humanity volunteering opportunities over the weekend where members could fulfill their volunteering requirement by helping build a house or upkeep one of their Re-Stores. Coffee sales served as a way of fundraising and volunteering, where members could man the stand to serve students hot beverages during the winter.

During the fall semester, we invited a professor in the mechanical engineering department of Georgia Southern University to speak to our members abut the career fields they would be entering and describing his experiences in them. This was a great professional development event, as our members had several takeaways. As another vehicle of professional development, the chapter periodically included fun puzzles in chapter meetings that might be seen in job interviews to test resourcefulness and inventive thinking. A plant tour was in place for our members to experience manufacturing and quality control in a real industry setting, but COVID-19 unfortunately prevented us from fully implementing that event.

As a way of giving back to the society, the Georgia Southern Beta Iota chapter took it upon themselves to recreate the mold for the Pi Tau Sigma key statue, after learning the existing one had cracked. The chapter had some members volunteer their time to collaborate and design a double-faced version of the key in SolidWorks, which is soon to be fabricated and used for any chapter of Pi Tau Sigma who may want to install the emblem on their campus grounds.

Many other activities were planned by the Georgia Southern Beta Iota chapter, but unfortunately fell through due to the COVID-19 pandemic.

This school year we offered many new opportunities to complete volunteer service that have not been promoted in the past. During the fall semester, our big volunteer opportunity was the canned food drive competition between PTS and our sister society Tau Beta Pi. In total, we were able to collect 421 cans that were donated to the local Statesboro Foodbank. During the spring, we coordinated with Habitat for Humanity to designate a build day in which our members could work with the leaders from Habitat on local construction, with our big opportunity for volunteer was to sell tickets for the end of the semester BBQ. Six members attended the Habitat for Humanity Build day.

We hosted three different guest speaker sessions, one in the fall and two in the spring. In the fall, a representative and Georgia Southern Alumni from Southern Company came and spoke to members and other students about various topics that included co-op rotation to career and salary negotiation. This same speaker returned in the spring and brought two other engineers, one from the nuclear and one from the transmission sectors of Southern Company and hosted an information panel in which students could ask the panel questions regarding life after college. Our final guest speaker was representatives from Kiewit Construction. They held a career fair in which they offered an informational session and held interviews the next day for potential employees. In the fall semester, we partnered with ASME and IEEE to host research presentations from professors in the Mechanical Department to promote different research opportunities available for students. This event was opened to the all students of the ME Department. Approximately 60 students attended this event.

The originally named “ME BBQ” was renamed to the “ENGR BBQ” to promote inclusion between the different engineering departments and for professors to become more engaged in activities outside of the classroom with students. This year the food included pulled pork, green beans, mac and cheese, and baked beans, all fresh and home cooked. Members woke up early on the morning of the event to start smoking the meet and setting up tables, tents, and the dunking booth. To promote more participation and attendance for the event, the location was moved to just outside the engineering building and a dunking booth that professors from every department volunteered to be in was incorporated as the selling point for the event. In total, our members sold over 75 tickets to the BBQ. Event specific t-shirts were also created and sold to raise more money at the event, with the shirts selling out. The event and was a huge success, resulting in over $900 in revenue and $200 in profits being donated to Habit for Humanity.

During the 2017-2018 school year, 18 students were inducted in the fall and 13 in the
spring. Induction for both spring and fall took place at The CLbhouse howling alley. New and
existing members were invited to participate in the induction ceremony and stay for food catered
by the Clubhouse and free bowling. Meetings consisted of informational sessions, fundraising
events, or food parties to encourage interaction among the members and were held twice a
month, every other week.
This past school year we had 30-40 active members participating in fundraising and
volunteer activities. During the fall, 8-10 members met for a campus clean up to pick up trash
along the sidewalks and pathways around campus. Furthermore, we partnered up with Tau Beta
Pi and raised over $200 in donations to be put towards Habitat for Humanity. Students were also
granted meeting attendance points by attending the STEM career fairs and EAGLE EXPO career
fair or peer tutoring. Some students took the opportunity to visit elementary and middle schools
for after school programs to promote STEM fields. This past school year two main fundraisers
were conducted. First, a fundraiser night was held at Wild Wing Café where students were
encouraged to attend. Out chapter received a percentage of the earnings that day. $253.84 was
raised from that fundraiser. We also conducted a pull over fundraiser that earned us $929.89. All
fundraiser proceeds were split with Tau Beta Pi.
Due to inclement weather earlier in the semester, we were unable to organize the end-of-
semester BBQ. This event was replaced with a pizza party fundraiser. The departmental awards
created last year were used to encourage participation and fundraising. The “Golden Wrench”
award was given to the professor whom students felt had been the most helpful in the department
that semester. The “Departmental MVP” award is given to any person in the ME department who
was thought to be the most valuable player in the department. The most popular award is the
“Blue Shaft” gag award. The professor voted to have “shafted” students the most was chosen by
whomever had the most money “donated” to them. A total of $219.07 was raised by voters of the
“Blue Shaft” award and pizza and drink sales.