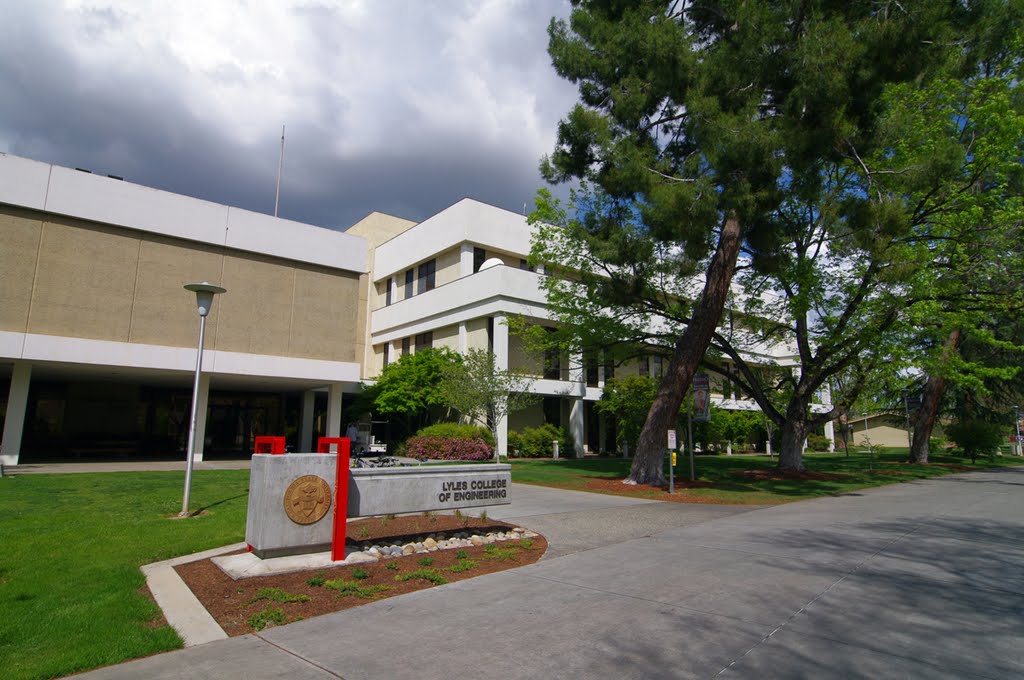 Through the vision (and insistence) of then-Mechanical Engineering junior Angela Cox and the leadership of Dean of Engineering and Professor of Mechanical Engineering Michael G. Jenkins, the petition for forming a chapter of Pi Tau Sigma in the Lyles College of Engineering at California State University of California, Fresno was submitted in early 2010. The Fresno State Beta Gamma Chapter was formally installed on February 28, 2010, by National President Mun Young Choi and National Secretary-Treasurer Alex Moutsoglou. Fresno State Beta Gamma Chapter remains one of the more active honor societies within Lyles College of Engineering and on the CSU, Fresno campus. Our student services include free tutoring, leadership and volunteerism at MESA Saturday academies, scavenger hunts, and student-faculty academic and social events. We also foster a high level of student-faculty interaction within our department The highlight of each semester is the festive All-Honors banquet held at the end of the term to welcome new initiates of the various engineering honor societies and celebrate the end of the semester. This banquet is co-hosted by all the engineering honor societies within the Lyles College of Engineering, including Fresno State Beta Gamma Chapter of Pi Tau Sigma.

The Fall 2018 Pi Tau Sigma Beta Gamma activities included seventeen (17) different events! The academic year was kicked off in August with a Beta Gamma officer meeting where the semester schedule was planned out. The first events of the semester were held in September and included, the Lyle’s College of Engineering (LCOE) welcome back BBQ, initiate meetings, bowling and billiards night, and the LCOE Xcape room officer council meeting. The welcome back BBQ is an event held every fall by the engineering college and showcases all the engineering clubs, as well as, industry partner booths looking to hire engineering students. This event typically contains about fifty booths. The next round of events was held in October and included: day at the park, game night, LCOE officer council meeting, and movie night. Day at the park was co-hosted with SunDogs who provided pizza. Movie night was co-hosted with ASME who graciously allowed us to use their reserved on-campus room. November started out with a MESA day volunteering opportunity and the CCEDC competition. The remaining November activities included: LCOE officer council meeting, game night, study night, and the scavenger hunt meeting. December was filled with a MESA day, study night, PTS key polishing and plaque decorating night, broomball, Fall PTS initiation, and the Fall engineering honors society banquet. The Fall 2018 PTS initiation was held on December 13, 2018 and welcomed four student members and one honorary member to PTS.

The Spring 2019 activities included twenty (20) different events! Spring semester started off in January with a Beta Gamma officer meeting where the semester events were chosen, and a calendar was made available. The first member events started in February and included Super Bowl Party, LCOE officer council meeting, LCOE basketball night, PTS National Convention at Colorado State, movie night, and PTS initiate meetings. The super bowl party event was a bowling night hosted by us at the university’s bowling alley and was opened to anyone to attend. The LCOE basketball night was a night for all engineering students to attend and be recognized at the university basketball game, as well as, be entered to win prizes through the college. Our chapter was fortunate enough to send four members of the officer team to the national convention hosted at Colorado State and returned home to share their enriching time with fellow members and initiates. March included the professional networking night (hosted by the collaboration between SHPE, SASE, and SWE), MESA day, LCOE officer council meeting, the beach volleyball and BBQ day, Pi Day (co-hosted in the college by LCOE, Tau Beta Pi, and PTS who supplied and served pie), the Mechanical Engineering Awards banquet, LCOE battle of the engineers competition, scavenger hunt meeting, and study night. The events in April included: the CCEDC competition, soccer, MESA day, LCOE officer council meeting, and movie night with ice cream that was co-hosted with Tau Beta Pi. May wrapped up the semester with events such as broomball, PTS key polishing night, Spring PTS initiation, and the Spring engineering honors society banquet. The Spring 2019 PTS initiation was held on May 9, 2019 and welcomed five student members into PTS.

In 2017 the Beta Gamma chapter came up with a new system to keep track of member activity. This new system was given the name "Dog Bone" points and different point amounts were allotted to different types of events based on officer decision. A total of 50 Dog Bone points was established as a requirement for Beta Gamma members to retain their membership in the chapter each semester. The officer team decided that social events would be worth 20 points , 4 hour MESA volunteer shift would be worth 30 points, and the 8 hour MESA day shift would be worth the full 50 points. During the Fall semester the officer team of the Beta Gamma chapter hosted a LinkedIn workshop for members, initiates, and any other students on campus that wanted to attend. This was also done before the Fall initiates were required to turn in their resumes and included a topical section on resume building to help the initiates to perfect their resumes before submitting them. The MESA Saturday Academies were held on two separate occasions during the Fall semester and are available to be worked in 4 or 8 hour shifts. Volunteers in the program, who are all members of campus engineering honor societies, help lead competitive science and engineering activities for middle school and high school students.Only one of these MESA volunteering opportunities was offered in the Spring semester. In the Spring, we co-hosted a meet-and greet banquet with industry professionals (hosted with the Society of Women Engineers). We co-hosted a campus-wide pie-eating event for Pi Day in conjunction with Tau Beta Pi Rho. In April, Broomball was hosted as a social event. Tau Beta Pi was invited to attend to compete with Pi Tau Sigma at an ice rink that was rented out for an entire evening. Every semester, PTS hosts a scavenger hunt social event to give potential initiates a chance to get to know members, officers, and other initiates as they compete to solve riddles and find various objects around a 300 acre park. After socializing, they are given an hour to find as many pieces as possible. The as-cast PTS keys and plaques are distributed to potential initiates at the conclusion of the scavenger hunt. This event is mandatory for all potential initiates.The finished plaques are turned in on the day of initiation. Toward the end of the semester, a key-polishing event is held in an effort to give tips on how initiates can produce the shiniest key.